Posted on August 22, 2012 by brambleshirefarm

Well we finally got the trailer loaded with tools and materials this morning. Getting to the farm was a bit of an adventure in of itself, traveling with the trailer completely loaded down for the first time since building it. So that was a tad nerve racking for some reason. Wow, in the Gulf War I slept in more dangerous situations, but for some reason, the trailer un-nerved me a bit. All I could picture is hitting a bump in the road and tools shooting out of the back onto and into the cars behind us. LOL Needless to say, nothing so catastrophic occurred today.

Getting to the farm finally was a bit surreal. As I stepped out of the Xterra onto the dust and sand covered driveway, a tumbleweed skipped by, while I listened to the classic Clint Eastwood “The Good, The Bad, and The Ugly” gunfighter theme in my head. The sun was hot, beating down on me relentlessly. Just as I was about to twitch my eye, reach for my gun, and utter some incredible movie worthy quote, a Grasshopper jumps at my face! Only a Grasshopper could ruin my official entrance into the farm!

As we walked onto the front porch, we noticed spots everywhere! (Pics coming soon to a theater near you) The only thing I can think of is perhaps fly poo, assuming that flies actually do … poo. (sorry, couldn’t figure out a better way to word that without it rhyming). At any rate, the front porch is badly in need of a scrubbing, item #172 added to the ever growing list.

As we walked in to the house, we were met by, what can only be described as, a “sewery smell”. The septic tank was inspected and pumped yesterday, so perhaps that is the source of the smell. It isn’t overwhelming. I think. I suppose it is possible that the offending odor burned our nasal passages down to the capillaries, thus destroying our ability to smell anything whatsoever. Which would explain why after sweating for six and a half hours, I was still impossibly spring fresh.

While the previous owners had the house “professionally” cleaned, it was pretty bad. I suppose different people have differing standards when it comes to cleanliness. And yes, I realize on the farm things won’t be immaculate. But wow … grubby switch plates, stained carpet, and a half inch of dirt (literally) in the window sills. And the toilet seats … lets just say the only remedy was to replace them. I recommended that we dispose of them by sending them to Mars, but rescinded that thought because it was cost prohibitive and I didn’t want to be responsible to creating life on the Red Planet … cause there was plenty of things alive on those toilet seats!

Here is the offending light switch: 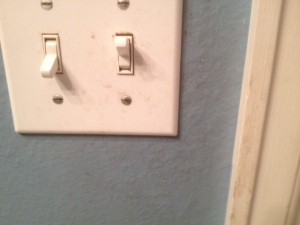 And here we have a sample of the Gobi Desert under the carpet. We are still sifting the sand for artifacts.

I opted to not post the toilet seats. But we do have the pics and will provide them upon request only. I can see the requests rolling in now!

Ok, a few more pics. Me removing carpet and Deena removing the nail strips. She cranked and cleared the entire house of them! I am so proud of how hard she worked today! 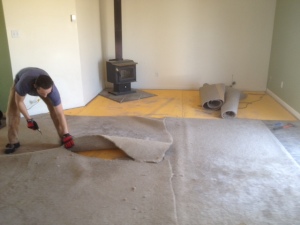 And finally, I leave you with one final parting thought. The flies in the house are ridiculous. I mean tons! I can assure you that the volume of flies you are envisioning right now are woefully inadequate. The counter top “bowed” under the weight of them. If I could draw them into a conflict with the Grasshoppers, it would be West Side Story all over again! Jets killing Sharks, Fly killing Grasshopper … Oh the humanity!! However since I didn’t have time for Riff and Bernardo to start their deadly dance, I decided to wade in with the fly swatter and just started swinging. Do you remember the huge battle scene in the Lord of the Rings movie, when Sauron approached the Elevs battle lines, swinging his mace [+24 melee (1d8+16) … I got the D&D damage calculation from a nerd on the D&D forums … its not like I sat here and calculated it myself using the 4th edition standard deity rules based on Sauron being a 15th-Level Demi-God Wizard … pfft … that would be so sad … but I digress) … when Sauron would swing his mace, the Elves would go flying in gaggles of 10 or 20 … awesome right? Oh yeah, I sent those flies … well … flying, sounding like an assault rifle as they ran face first into the aptly named weapon, The Swatter! None could stand before me!! After my initial onslaught and with the flies scattering to the four winds, I was reduced to using my RIDGID® 12 Gallon High Performance Wet/Dry Vac as my implement of destruction, and it was no less delicious!

We have a small piece of heaven that we are working on bringing back from over use and miss use. We have big plans for our farm/homestead and family. Please drop by on the blog and say hi!
View all posts by brambleshirefarm →
This entry was posted in Farm, House and tagged bump in the road, gaming, travel, vacation. Bookmark the permalink.

4 Responses to Gaining a Foothold …